This humor-filled nonfiction picture book, beautifully illustrated by award-winning illustrator Alison Jay, describes what is likely the most unusual military conflict in American history. In 1859, in the Pacific Northwest, San Juan Island lay smack on the border between American and British territories. Who would claim it? This is the tale of how two giant nations almost went to war over a pig in a potato field–and instead decided to share.

From Calkins Creek, an imprint of Boyds Mills Press and Kane. Fall 2020. Illustrations by Alison Jay.

STARRED REVIEW ★ “Jay’s crackled, primitivist illustrations of cannons and distant figures in antique dress and uniforms add a proper sense of period to Smith’s brisk account of the historical episode, which the author presents as a timely case study in how countries with differences can find peaceable alternatives to armed conflict.” –Booklist

STARRED REVIEW ★ “Two wars have been fought with England on American soil, and now in 1859, on the Northwest Coast island of San Juan, war number three is about to erupt [over a pig]. Smith deftly captures the retrospective absurdity of this historical incident with deadpan narration that will have young audiences slapping their foreheads in mock dismay over the childish behavior of hotheaded adults. Jay adds absurdity of her own in her visual parody of nineteenth-century art—portly, self-important men straining at their buttons, rendered in the dusty hues and crackled surfaces of naïve folk art and portraiture.” —The Bulletin of the Center for Children’s Books

STARRED REVIEW ★ History has never been as much fun as you’ll find it represented in this cute picture book! Of course, with illustrations by Alison Jay, one should expect nothing else. The text is simple yet detailed enough to tell the story fully. The illustrations are very compelling and practically beg the reader to turn the page to see what comes next. This would be an excellent book to share with young or even older children when discussing this aspect of American history. This book would also make an excellent model for children to use in creating their own American history tale. Elementary libraries should definitely include this book in their collections.” Highly recommended. —School Library Connection

“Smith’s narrative dives into a strange and humorous slice of history that nearly started another war between the two countries. This porcine altercation is detailed with lofty humor that makes for an intriguing and endearing read. Jay’s distinctive illustrations, rendered in alkyd paint with crackle glaze varnish, lend an old-timey feel and playful whimsy that matches the tone of the text. The book’s humor and whimsy provide an interesting narrative nonfiction read for elementary classrooms.” —School Library Journal

“This is a true tale about two mighty nations, an ill-fated pig, and a most unusual war. It is also a story about sharing.’ That opening, in black, sans-serif lettering, is followed by…a jaunty, lighthearted tone that proceeds throughout the text. Colorful, stylized art against apparently distressed surfaces is an impeccable complement. Weirdly fascinating.” –Kirkus Reviews

“How that all unfolded is told in brisk and charmingly snarky prose by American writer Emma Bland Smith. (This book would definitely make for a fun read-aloud in any teacher’s classroom.) But for me, the folk-art-inspired illustration by British artist Alison Jay is what really makes the book special. The illustrations in this large-format book stretch over two pages, and the reader will definitely want to take time as each page is turned to savor all the details.” –The Friends Journal 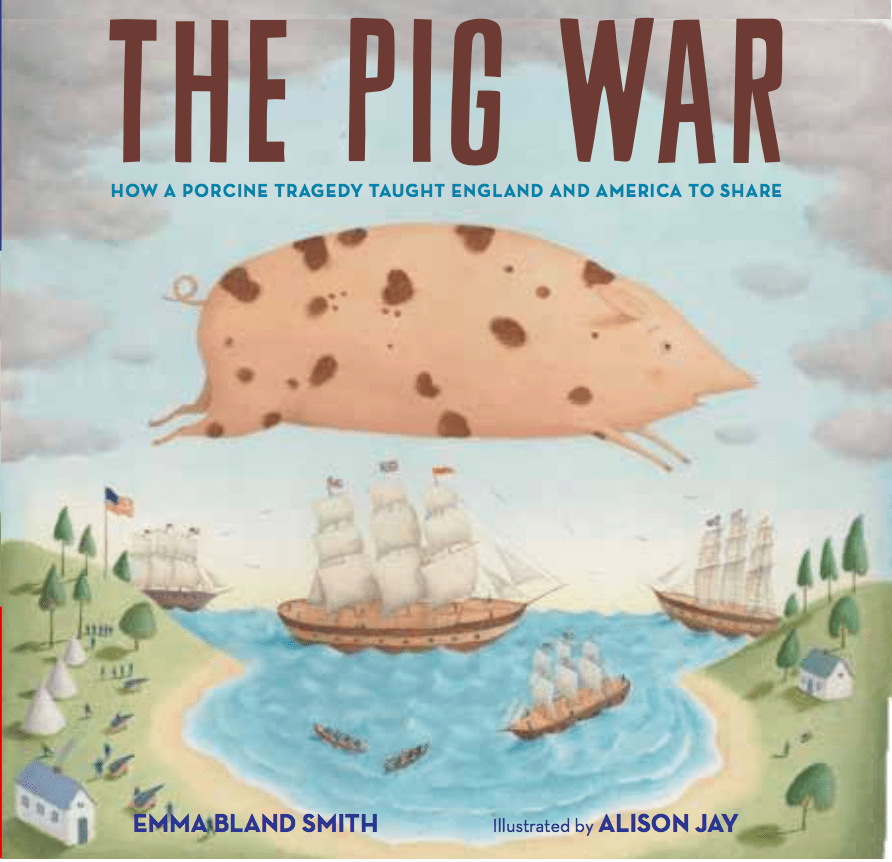